A stampede of recruiters and admin staff scrambles from room to room, pushing their way through tight hallways and into random spaces.

As papers fly and drawers are pried open, the pressure to find a medallion coin and earn an extra vote reaches an all-time high. In an instant, coworkers and friends transform into relentless competitors. 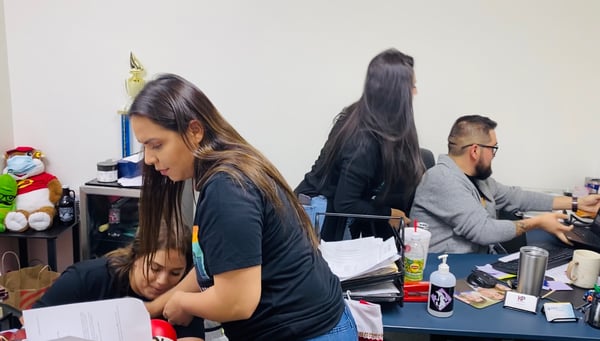 The game of Survivor is built on diligence, strength, and tactic - not to mention likability. It’s the type of game that forces competitors to push their personal limits when the stakes are high.

For the expert recruiters and admins at KP Staffing, it’s more than an opportunity to win a grand prize of $500; it’s a positive way to close out a chaotic year.

The competition is over the span of 5 weeks and consists of randomly chosen challenges, from matching games to word puzzles. Each Friday, KP employees gear up to win challenges, find medallions for an extra vote, and vote on who they think deserves a space in the finals. Four lucky contestants will make it to the end to play for the $500 grand prize!

With tension in the air and alliances quietly being formed, the competition hit a new level of anxiety.

"This week was challenging, the games were harder, the tokens were harder to find," Estefany Gonzalez said about Friday's events. Last week forced the staff to be extremely detail oriented, leaving no spot in the office off limits. Contestants like Monica Garcia managed to find a coin in a less than ideal location - an unused toilet paper roll in a bathroom stall.

Branch manager and Survivor enthusiast Ryan Beckman exuded intensity while spearheading the competition and acting as the show’s host.

As he explained the rules of the descramble word game, recruiters and admins itched with excitement to win that week's bonus prize: free lunch from Buffalo Bros and, more importantly, bragging rights.

Cheers, high-fives, and accolades erupted after team two managed to clinch the victory in record time. Following the challenge, contestants voted on who they thought deserved one of the four coveted spots in the finals.

To earn support, employees campaigned all week, from graciously buying the office breakfast to completing extra tasks as a helpful hand. Strategies were made, leaving everyone wondering which approach would result in the most votes. 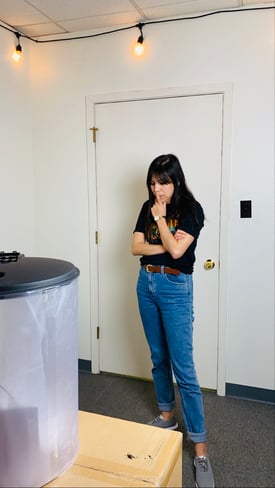 As names were drawn, it became apparent that no one would successfully buy votes - those who went out of their way to gain favor in the office the week prior reaped no benefits.

The first count came in at a three-way tie for the second week in a row, requiring a revote.

Staff members went back to the voting room to cast one last ballet. To everyone’s surprise, the final decision still came down to a three-way tie.

Ultimately, the employee who took the title of victor was determined by a randomly chosen envelope. At the count of three, each contestant opened their envelope to reveal either “loser” or “winner” written on the inside. It was truly anyone’s game at that point.

The outcome was shocking to say the least.

Many of the contestants were left wondering how the game would end overall and what they could do better to set themselves apart in the next round.

Trey Mullens describes his strategy going further, "My game plan is to try to get people in the finals that aren't as popular as me, then maybe I'll get more votes in the finals," he explained.

As week three of Survivor: KP Edition quickly approaches, the office buzzes with questions surrounding what will happen next. The only thing they know for sure is everyone will continue to bring their A-game to fight for the $500 prize.

But these games are more than an opportunity for someone to win extra cash, they’re a chance for employees to show each other support.

It will be interesting to see how the competition unfolds in the upcoming weeks and who will take the title of KP’s first Survivor champion.

Check out our Instagram for our live updates, and stay tuned for the premiere showing of Survivor: KP Edition to hear about each week’s winner.

Who do you think took home this week’s vote, bringing them one step closer to victory? And who would you place your money on for the final count? Let us know in the comments.